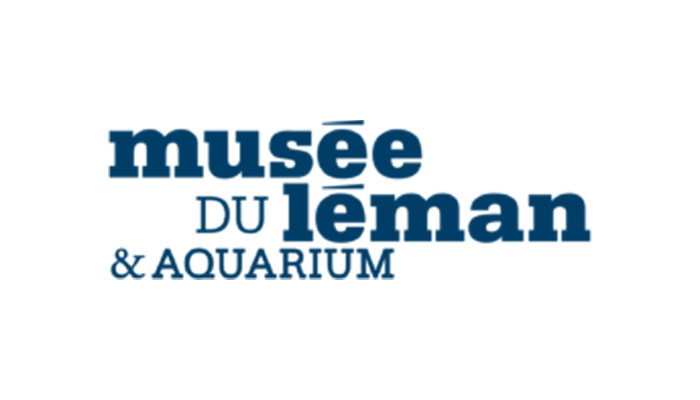 The incredible story of the tsunami in Lake Geneva

A tsunami on Lake Geneva, really? At the Museum of Lake Geneva in Nyon in the canton of Vaud, we learn that a wave of 13 metres swept across the lake in 563, carrying everything before it. We look back on this incredible discovery with Lionel Gauthier, curator and director of the museum.

When one thinks of the lake, we imagine a calm setting in comparison to the sea and its tempests. However, a tsunami shook the lake in 563 A.D. Did it really happen or is it a legend?

Let’s start with a fact: Lake Geneva is not a peaceful lake! In addition to tsunamis, it’s a very windy lake where meteorological conditions can change very quickly. Sailors on the lake are very surprised, Eric Tabarly, the famous French sailor among them. He said he knew that Lake Geneva was treacherous, but not to that extent! As for the tsunami, it’s not a legend. It was for a long time but in 2012 we found out that this event actually happened on the lake, in 563. Indeed, we know that there were four others, and that similar tsunamis have occurred in lakes close by in France, Italy and in German Switzerland.

What caused this tsunami?

By combining the human and natural sciences, we know the story of the tsunami from A to Z: we have geological traces, with the discovery of a large layer of sediments found by researchers in the central part of the lake, and traces in the archives, which now allow us to recount this amazing story. A whole face of a mountain collapsed in the plain of the Rhone followed by an earth tremor that generated a force that propagated until the Rhone delta, at its entry in the lake. In the lake, this violent energy mobilised the sediments brought by the Rhone and fallen to the bottom of the lake. This sub-lacustrine avalanche was what triggered the tsunami, with a wave that started from the eastern end of the lake and which rapidly advanced to the other side.

Have we any idea of the damage it caused at the time?

Mention is made of a wave 13 metres high at Lausanne, and 8 metres at Geneva. The first wave gave rise to aftershocks: 4 or 5 waves succeeded each other within the space of several hours. The damage was huge. We know that the bridge of Geneva was completely torn away. Nonetheless, the damage was less than if the tsunami occurred today, with the low level of urbanisation of the shoreline at the time. What’s certain is that everything on the shore was carried away by the waves.

What are these historic writings, these first traces of knowledge of the tsunami? What do they tell?

There are two concordant sources: two bishops, Marius of Avenches and Gregory of Tours, told of this event in their chronicles. That’s what got scientists thinking in the 19th century, a period when many learned people were trying to understand what happened. To have two sources that said the same thing at the same time provided sufficient evidence to generate a swath of hypotheses. However, there was no proof until 2012.

Extracts from the manuscript of Chronicles of Marius of Avenches: “That year, the great mountain of Tauredunum in the diocese collapsed so suddenly it crashed onto a town and villages close by, and at the same time on all their inhabitants. Its fall also set in motion the whole lake, 60 miles long and 20 miles wide which, breaking its two banks, destroyed very ancient villages with men and cattle. The lake even demolished many churches along with those that served in them. Lastly, it carried away the bridge of Geneva in its violence, the mills and people, and entering in the city of Geneva, killed many people.”

How were these hypotheses confirmed in 2012?

Two geologists, Stéphanie Girardclos and Katrina Kremer of the University of Geneva, carried out a study on Lake Geneva, using seismic reflection techniques. Waves are sent to the bottom and then return, making it possible to map the bed. Suddenly, they saw an enormous mass of sediments on their screen, something that was abnormal. The mass was such that it had to linked to an unusual event. It’s possible to have sediment deposits of several centimetres or several millimetres per year, whereas they found a deposit of seven metres with a volume estimated at more than 250 million m3 accumulated in a single day! Stéphanie Girardclos, who comes from the region of Geneva, immediately made the link with this legend that geologists had handed down from generation to generation.

What can this tsunami tell us about the future of Lake Geneva? Could such an event repeat itself?

Geologists are quite clear on the fact that the question is not to know if it can happen again but when. They are also clear on the fact that a new tsunami will not be as destructive as that in the 6th century. The next tsunami could be due to an earthquake, which could loosen the sediments, probably in a lower magnitude. But somewhere, we know nothing of when, why, or the extent.

The tsunami of 563 teaches us that we’re faced with a risk, even if we can’t do much about it. We’re not going to build walls all around the lake to protect ourselves from a possible tsunami. On the contrary, we can imagine territorial development that takes this risk into account. We’re not going to build a nuclear power plant next to the lake, or a hospital, or any type of infrastructure that we need in the case of a disaster.

Has this event made the towns bordering Lake Geneva think about their urban planning strategies? 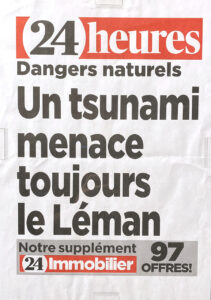 It’s a difficult question; the geologists who discovered the existence of this tsunami obviously started work to spread awareness of this phenomenon. In addition to this incredible phenomenon and this fascinating story, lessons can and must be learned. But the urbanisation around the lake has reached such proportions that there is no going back. The challenge is rather to maintain knowledge of the risk when designing new developments, when new plans are drawn up. The risk is too random and too uncertain to start destroying whole neighbourhoods.

Front page title of the newspaper 24 heures, collection of the Museum of Lake Geneva.

The tsunami is linked to the accumulation of sediments in the lake. Would more regular dredging be efficient, or is the discharge of the Rhone too strong to allow it?

I think that it’s illusory to carry out dredging to prevent another tsunami. There is simply too much sediment! The problem is above their deposit on submerged cliffs in the lake; it would take titanic works to turn these cliffs into gentle slopes. I asked the geologists whether the idea of triggering preventive avalanches, like in the mountains, could be possible. Theoretically, it’s not impossible, but much too uncertain to be implemented.

Does the history of this tsunami make the public aware of the complex dynamics of natural ecosystems?

I don’t really think that there is any awareness: the event is too far away in time. It’s considered an interesting story, an incredible story that surprises and amazes, but which does not really lead to genuine reflection. I haven’t seen any visitor leave the museum pallid with fear. I myself never think about it every day. We’re too detached: more than 1,000 years separate us from this tsunami. If it had occurred fifty years ago, I could never have put on the same exhibition. It would have been loaded with memories, pain, whereas the current exhibition treats the tsunami like a legend that became true, not as a disaster loaded with suffering.

The tsunami proves that the memory of such events can be maintained for several generations. People told each other the story until it vanished. Without the writings of Marius of Avenches and Gregory of Tours, the event would have disappeared and we would have known nothing. The geologists would have discovered something they would not have understood and they couldn’t have explained it. We’re confronted here with all the importance of historians, museums, archives, conservation, and heritage. Conserving memory is not simply a question of pleasing and amusing oneself, it’s also to permit better understanding of our present and preparing the future.

“A tsunami on Lake Geneva”, an exhibition to be discovered at the Museum of Lak Geneva until January 2024

Lionel Gauthier
Read more
See all news
Our site uses cookies to ensure its smooth operation and optimise its performance. By continuing to browse on this site, you accept the utilisation of audience analysis cookies.I understand